I decided recently that spending my life sitting in a cubical under florescent lights hammering away on resumes is not the life I need.  I have been in the boring, yet safe human resources field for twelve years. Change in my life was clearly needed.

Yesterday I had my first interview for an amazing new job. I adorned my “interview suit” and headed to a local health club for a management position. As I sat down in the waiting room I sized up my competition. Clearly I had been in the corporate world a little too long. It quickly dawned on me that of the ten other interviewees; I was the only one in a suit. Being a health club, the standard dress is polo shirts and khakis. Everyone around me, including the staff conducting the meetings, sported athletic wear.  As we began the interview, I was asked why I wanted to leave a comfortable office job for the chaos of a gym. I tap-danced through my beliefs of always wanting a crazy job with the buzz and excitement. The standard questions you give in an interview, the ones I’m usually asking, were easy to answer. It’s funny and very true that the hardest person to interview is someone who has worked in hiring and recruiting. 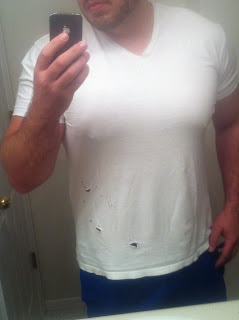 Sitting in the Manager’s office in my imported power tie, and after I unintentionally corrected the interviewer’s knowledge of labor law, we both attempted to see if I was not a square peg being forced into a round hole. She asked about my passion for the fitness industry. I did my best to explain that I’m really just a gym guy.  I truly live in gym shorts and tee shirts and I’m most happy out on my bike or at the gym. At the end of the interview I had the overwhelming urge to rip off my tie and shirt and show my hole filled undershirt.

The lesson I learned is to dress the part. Dress for the job you want.

We will see if I get a call back.
Posted by Nice to see StevieB at Thursday, September 27, 2012 4 comments:

Glory is fleeting, but Obscurity is Forever

Sitting at my dinning room table this morning, I attempted to write an introduction to my latest paper on why Napoleon Bonaparte was able to rise to power. It didn’t go very well. This stems from not having a single shred of interest in Napoleon, even if he is regarded as one of the greatest military commanders of all time.

So far I had only written several jokes about Mr. Bonaparte driving a Chevy Corsica. This led to three paragraphs in regard to how American car manufacturers take “far-off” exotic names and badge their badly made vehicles. “Oh, I drive a Chevrolet Corsica! Every time I drive my Corsica I feel like I am in the birthplace of Napoleon, the French island in the Mediterranean Sea. Feel the breeze. The air. The total disregard to civil liberties.”

I’m quite sure my Western Civilization Professor would not appreciate a six page paper on how the Monte Carlo, Malibu, or my favorite, the Buick Lucerne received its badges. She wont care that the Lucerne was named either from a town in Colorado, a brand of cottage cheese at Safeway, or the name of fourth largest lake in Switzerland.

Although since we know that in 1798, Switzerland was completely overrun by the Napoleonic French and became the Helvetic Republic (where they invented the font), I could work that car’s name into my report. My report will be, Napoleon: Greatest Military Commander of all Time, as he is commemorated in The American Auto Industry.

Did Napoleon ever make it to Grenada?
Posted by Nice to see StevieB at Wednesday, September 19, 2012 4 comments:

It must be the cooler temperatures, it seemed that everyone I know wanted to have people over this weekend. This patio lust was brought on by amazingly perfect weather and the thought that it won’t last long.

On Sunday morning I still felt the over-indulgence from two separate parties on the day before. Grilled steaks and the last of friend’s garden harvest, prepared to perfection, enticed me to stay at the coffee shop and not head out for my much-needed run around the park. Slowly, I made my way to the park to run, so happy that I was burning away such great meals.
Posted by Nice to see StevieB at Monday, September 17, 2012 No comments:

Site of The Week


REMEMBRANCE OF TEAMS PAST 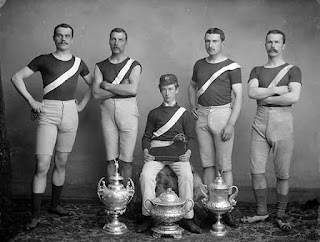 Check out the site...

How was your American Labor Day? Mine was spent ignoring a school assignment of reading a book and watching an assigned documentary on the American Revolution. Well, that and listening to my Mother make long, drawn-out diatribes about Mittens Romney being elected as America’s next ruler, and ushering in a new era or Mormon dominionism.


Last night I walked into my Western Civilization class to a fifty question test. On the American Revolution, not Mormon dominionism. Trust. I’ve had all the education I need on the spirit of Joseph “F-ing” Smith ushering into the White House.

The fifty questions in regard to the U.S. forefathers took a “why” instead of a “how” context. Without giving this assignment a single thought, I had to pull every fact from deep in my tiny brain. Seeing as my tiny brain had more important things to mull over; such as, was every Dalek really in the season opener to Doctor Who? And, was that really the new companion playing the part of Carmen? As these questions held the hexarchy of my thoughts, the name of George Washington’s big brother’s trading company was nowhere near the top.

I guess I did know the name of the trading company that set off the French/Indian war. I only missed one question. Yay! Let’s hear it for utter nerdiness. I, of course, ignored the comment from my fellow student when he inquired if I had “first-hand knowledge” of the founding of our country, as he is a hockey player that shies away from underpants.

So, if you ever need information on why the British and French used the Native Americans for their top hat lust, I’m apparently your guy. If you need to know why Mittens Romney will prepare us to meet Mormon Jesus, or why the Bronze Daleks are so high up on the Dalek hierarchy. Just shout. This, of course, cements into place my utter nerdiness, leaving all hope of me as cool dead outside of a crashed space cruiser.