This is what happens every night at Southfork.
Steve-Um, what’s for dinner?
Fuzzy-What do you want?
Steve- Food.
Fuzzy-What kinda food?
Steve-Something good.
This goes on for awhile, longer then any two men should possibility talk this way. I can make where to eat into a scene from Hamlet.
“O! what a rogue and peasant slave am I to Taco Bell!”

We decided that pancakes where the only way to go for dinner and we found ourselves at Uber-Target. Now, I personally will only eat pure maple syrup but Fuzz will only eat that brown stuff that’s 99% High-Fructose corn syrup. This is when he turned to me and asked. “Who do you think would win in a cage match, Aunt Jemima or Mrs. Butterworth?” “Well I guess, who ever wants it more.” “Well, They’re both strong black women.” I stopped a second, “Mrs. Butterworth is Caucasian.” Fuzzy looked like I just stated that the Pope was a Scientologist. “No, She’s of African Descent” “Ummm, I think she’s white. Ya-know grandmotherly, cute little white woman. “No she’s a strong black grandmother!” So this continued on for quite a while, so long that a big haired house wife had to quickly grab Log Cabin and run. We decided that we were going to “Google it.” Either way Aunt Jemima has had a harder life and would take Butterworth in 2 rounds.
I’ve been reading everything I can find on this Butterworth creature. I’ve found nothing to prove for a fact the ethnic heritage of this woman I grew up with. I did find that the voice for Mrs. Butterworth, Mary Kay Bergman, took her own life at age 39 in 1999. That will dampen your Syrupy goodness. Oh, Mrs. Butterworth you are truly what Barack Obama means when he speaks of Ethnic culture in America. It is not the package that we judge it’s the syrup inside.
Posted by Nice to see StevieB at Wednesday, April 30, 2008 2 comments:

I was getting ready this morning and found that I couldn't find the dog. Since Fuzzy sleeps late they're usually curled up in a furry ball. That's when I spotted a paw sticking out on the other side of the bed. I ran and got my camera: 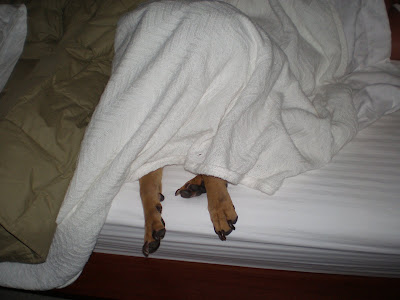 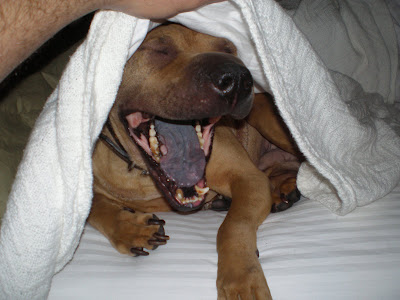 I guess I've gotten to the point where I post pictures of Shar-peis.
Posted by Nice to see StevieB at Tuesday, April 29, 2008 No comments:

I just wanted to recap everything I’ve eaten this weekend. This will not include the fact that I ate my weight in Taco bell on Friday. Saturday morning we actually slept-in which rarely happens but Fuzzy still wasn’t feeling well (tummy ache.) I think this was due to his huge concert he was to conduct later that night but I digress. Since the tummy ache we did not make sweet furry love. We had a nice quiet “gym shorts” type of morning, he made coffee and I started the chores, cleaning mostly. We’re still trying to put together the office after moving in together. The topic moved to hanging art. DANGER, DANGER! We proceeded to have a “lively discussion” about what and where to hang stuff. I kept thinking “ Wow, how many gay couples in the history of time have fought over Herb Ritts?”
After sneaking some Peanut butter fingers, not the candy bar but when you drag your fingers through the peanut butter then suck off the yummyness it was way past time for food. We went to Village Inn, a Denny’s type of restaurant awash with pastels and aged Asians. I had the Ultimate skillet, toast and pancakes. Two bites into it asked Fuzzy if they forgot his French Fries, “No just ate them already.” Wow.
Soon it came time to drop off Fuzz for his concert and I met up with Carl n Will for Dinner, still full from Lunch/breakfast. We ended up at Chili’s where we inhaled chili fries and for dinner I decided to have another appetizer. It was intended for a party of four but I finished it off nicely. The concert went well, as much as one can enjoy Mozart on classical organ. Afterwards The Fuzz and I stopped at a gas station for dinner, we selected a nice burrito entitled “The Bomb” and Moon Pies. Washing this down with a nice Diet Coke. We then watched Logo’s Alien Boot Camp until 2AM when my stomach planned a mutiny.
Posted by Nice to see StevieB at Sunday, April 27, 2008 4 comments:

I put down the top on the Jeep for the first time this spring. I know when Spring has arrived to the Rocky Mountains when I can drive through the park when the top down and the sound track to Run Lola Run blaring. It’s like when the tulips bloom but more like pansies in convertibles.
I’m in the middle of the ritual of removing the top and listening to Everything But The Girl when the neighbor came out to go to church. The 7-year-old boy ran up to me, apparently he likes to flirt with me. He runs straight up to me and said “ I know a lot about space!” Sooo gonna try that in the bar. I zipped back yeah, what about Uranus!” Pronounced YOUR-ANUS. Then quickly thought, well this is a great way to get arrested. The kid had a puzzled look on his face, Uh… I mean UR-IN-US, the seventh planet from the sun? He smiles, “have a good day!” He turns running back to the mini-van. God, if ya’ll don’t hear from me it’ll be because I’m jail. Have I mentioned how much I hate kids?

Here's a pic of me topless in the Jeep: 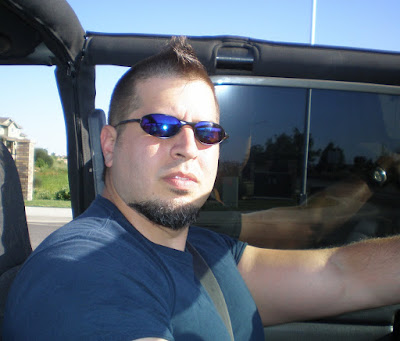 Tales from the Safeway

I had to run to the Safeway today to pick up a Happy Retirement card for someone I’ve never met from our corporate HQ. I find it soothing to by crap for people I don’t know, but I’m not in my office so hey. I get to the check out line and the woman in front of me turns to me like we do each others Pedies and giggles “I’ve forgot something, watch my cart and you can go in front of me.” Now the word “Coolie-O” came out of my mouth, I don’t really know why. But hey we’re pedie mates so coolie-o. I’m standing there for a while and I’m having fun judging what’s in her basket, thanking God I’m gay. The Hets buy some weird stuff. So she comes back and starts loading her groceries onto the belt. I thought of doing it for her but ewww, I’m not touching Pampers even in the package. As I get to the cashier I state that I’m just getting the card. She responds “what about your groceries?” I turn and the lady is gone, again. Trying to be funny I say “I would never buy Ragu.” Then together the cashier and I look down to see that there is no Ragu anywhere on the belt. Obviously she had looked to see me standing by myself by this shopping cart, and now Ragu lover has disappeared leaving me with pampers and no sauce to go with them. “Sir what do you wanted me to do with your groceries?” Now they’re mine? “Sell them to the next lady that comes up to you” I say “I just want this card Please.” She then muttered something under her breath that sounded like “crazy fool.” So she rings up my card in time for Ms. Pasta Sauce to return and says “Thank you Mr. Leroy” Without thinking I shoot “Who” “Earl Leroy, it says soooooo on THE card.” Now since I was using the company card it has my bosses name not mine. Oh….yes. “And it’s Mr. Le Roy” I grab my card and run away.
Posted by Nice to see StevieB at Thursday, April 17, 2008 1 comment:

Tummy ache with the cow

I pretty much decided to get the stomach flu yesterday. Good choice I thought. So I stayed home all day yesterday. As we hung out on the Super-squishy ell shaped sofa of love I realized that I had not spent a day at home in years. The last time was during the “Great Steve Pneumonia Scare” of 04. I hate spending time at home, “just hanging out” I’ve always got be going somewhere. So even though I was home sick I did laundry and vacuumed. I was, however to sick to even log on to Big Muscle.com, now that’s sick.
Did I ever mention that Fuzzy has this dead cow on the wall, not a whole dead cow just the hide or fur. I think it’s kind of cool, as much a dead cow hanging on your living room wall can be. But I’ve been staring at the cobwebs for way to long. So with the stomach flu I grabbed the vacuum drug it and myself on to the loft area and sucked it clean. He’s a very clean cow now. And am happy even if I’m sick as a dog.
I think I'm gonna host a "name the cow" contest. I'll get some pics of him/her/it so you can really feel the name come to you. I'd post them now but I'm to busy puking to work my Instamatic.
Posted by Nice to see StevieB at Thursday, April 10, 2008 4 comments: