Have I mentioned that this is my last week for my semester?  I know I haven't blogged a lot about my classes this semester. This was due to the fact that I had a Science class which attempted to kill me, and a creative writing class that left me bored. Horridly bored. Both classes were painful. Not in a "oh I gotta write 1,000 words on Lucius Tarquinius Priscus" kind of pain, the "make it stop, this is idiotic" kind of pain.

My Science class was entirely on-line. This meant that the tiny bit of fun in doing labs was even taken away. It was eight weeks of drawing diagrams of molecules and energy waves. I am a Right Brain kind of person, the go with your feelings kinda guy. I quickly discovered that a Science class, on-line was the wrong choice. I would be on route to failing the class miserably if not for the help of the Boyfriend. He happens to be some sort of medical scientist statistician working of HIV programs.  So, he may-or-may-not have helped me. But, your associated with my University, he didn't. At all. Totally. And, why are you reading my blog, you've got university stuff to go do.

The writing class was just about "finding your voice" and "setting the scene." Those are the last things I need to think about my writing. The second I think about "finding my voice" I seize up and won't blog for two months. The last time I thought about becoming a better writer, it took Patrick from Pacspad blog a week to talk be down from the "I'm done with blogging"  ledge.

So, this week marks the end of another semester at school and good riddance. Onward to Spring semester and Ancient world Religions...
Posted by Nice to see StevieB at Wednesday, December 09, 2015 3 comments:

To begin our celebration of Christmas, the roommate and I decided to head to the mountains in order to get our own live Christmas tree. We had decided that we would go massively overboard for Christmas this year, so this was the first step. This choice stemmed from me having just ending a nine year relationship with  Mr. Scrooge himself, and the roommate, whom had roommates for years, never had his own celebration the way he wanted it to be done. First step? Go murder an innocent tree and drag it back to the house. I declared this trip into the woods triumphantly to the boy I’m dating, (still known as TMBBE, or “The most Beautiful boy ever” for the lack of a better nickname) as a normal, healthy super-Christmasy thing that normal people do. This is when he calmly informed me that he never had a Christmas tree before. Like ever…ever.

My mouth dropped open. I stammered. “Like growing up you never had a tree?” He flatly informed me that no, his family had never. The next question that came out of my mouth will forever be noted as the stupidest thing I have, or ever will say. Please note the stupidity level… I said…. “But… where did you put your Christmas presents?”  Oh. My. God. There is not a more ignorant thing I possibly could of said at that point. And I said it. I was an ignorant baboon asking someone raised Hindu where they kept their Christmas presents if they didn’t have a tree. The Most Beautiful Boy Ever was polite in response to my stupidity.

What I learned is that if you take a grown man, who was raised Hindu, to a Christmas tree lot, and ask him to pick out any tree he wanted, you're going to see a lot of Christmas repression un-cork. It was non-gentile to Santa elf in 3.5 seconds. I have never had so much fun picking out a tree.

I had spent nine years with someone who saw Christmas as a hassle. A chore that involved assembling the same artificial tree over and over. Then, suddenly I was standing in a muddy field watching someone search for the perfect tree. I watched the grin on his face grow. A grin that comes from the magical act of family going to the tree lot and taking home for the perfect Christmas. I was cold, I was muddy.  I was never so happy. 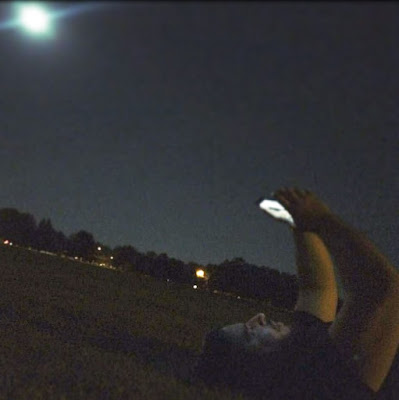 This is my favorite photo of myself. It was taken by my most amazing (and available) roommate, Mike. It was late summer and Mike and I had just illegally launched some Chinese lanterns in the middle of Cheesman Park. It was truly an amazing night. We laughed and joked as we entered the park, close to the parks closing time. But, our tone became more and more reserved as we watched the glowing lanterns drift higher and higher into he night sky. We stood alone in the middle of the darkened park. Witnessing the glowing light of lanterns fade away.

We sat in the grass and watching the full moon (pictured in the photo) slowly come out to join us.  In this shot you can see me in my natural habitat. Texting away.
Posted by Nice to see StevieB at Tuesday, December 01, 2015 2 comments: